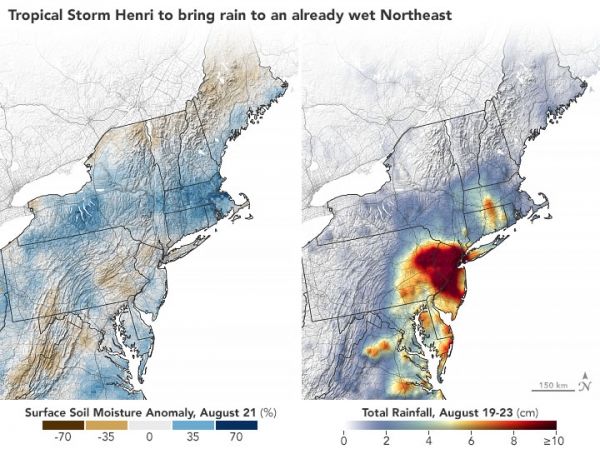 Henri did not reach the northeast U.S. coast at hurricane force, but the slow-moving storm still left a soggy mark on the region as it became a rare tropical cyclone to make landfall in New England. Months of rain fell in a few hours across New Jersey, New York, and several other states from August 21-23, landing on soils that were already soaked by an excessively wet summer.

Tropical Storm Henri made landfall near Westerly, Rhode Island, on August 22, 2021, with sustained winds of 60 miles (95 kilometers) per hour and gusts to 70 mph (110 kmph). In anticipation of the storm, the cities of Providence, Rhode Island, and New Bedford, Massachusetts, raised storm surge barriers in their ports for the first time since Hurricane Sandy in 2012. But the storm surge never became as severe as feared.

Rainfall was a different story. Widespread accumulations of 4 to 9 inches (10 to 23 centimeters) were recorded in New York, New Jersey, Pennsylvania, and Connecticut. Much of that rainfall fell to the western side of the storm, whereas the eastern and northern sides saw more moderate rainfall.