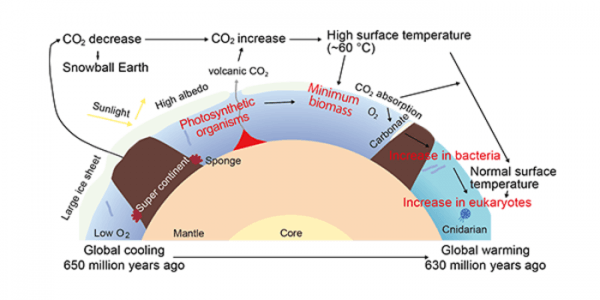 Some researchers hypothesize that ice sheets enveloped the earth during the Marinoan glaciation (650-535 million years ago) in what is dubbed the "Snowball Earth."

Some researchers hypothesize that ice sheets enveloped the earth during the Marinoan glaciation (650-535 million years ago) in what is dubbed the "Snowball Earth." The glaciation also impacted the climate and chemical compositions of the oceans, restraining the evolution of early life. Yet, as the earth warmed, and the Ediacaran period dawned, biotic life began to evolve.

A research team from Tohoku University has unveiled more about the evolutionary process of the Marinoan-Ediacaran transition. Using biomarker evidence, they revealed possible photosynthetic activity during the Marinoan glaciation. This was followed by photosynthetic organisms and bacteria entering a period of low productivity. However, as eukaryotes expanded during the early Ediacaran period, they blossomed.

Dr. Kunio Kaiho, who co-authored a paper with Atena Shizuya, said, "Our findings help clarify the evolution of primitive to complex animals in the aftermath of the Snowball Earth." Their paper online was published in the journal Global and Planetary Change on August 8, 2021.

Changes in Earth's environment and lifeforms during the Snowball Earth and its aftermath 650-630 million years ago. Black arrows show changes. The appearance of a supercontinent caused a decrease in ocean volcanism, which resulted in a decrease in atmospheric CO<sub>2</sub> and the Snowball Earth. Red words show new findings in this paper. (Photo Credit: Kunio Kaiho)