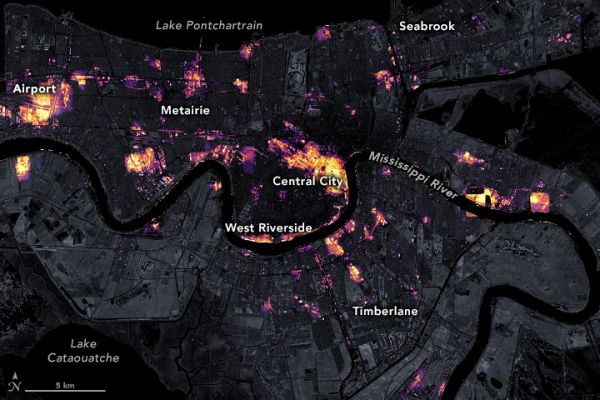 Three days after Hurricane Ida, many people in Louisiana are going without electric power due to downed power lines and damaged transmission towers.

Three days after Hurricane Ida brought fierce wind, rain, and storm surges to Louisiana, large swaths of the state are enduring electric power blackouts due to downed lines and damaged transmission towers. According to news sources, many people are also going without access to running water and gasoline due to damaged infrastructure.

A team of scientists from NASA’s Goddard Space Flight Center and the Universities Space Research Association (USRA) has mapped the outages using satellite data. The images above show nighttime lights data acquired on August 9 and 31 by the Suomi NPP satellite. The base maps make use of data collected by the Landsat 8 satellite.

“The imagery is surprisingly cloud-free. It usually would take at least 48 hours for skies to clear up enough after an event like this,” added Miguel Román, a USRA scientist and leader of the Black Marble Project. “At this aftermath stage, Black Marble imagery is capturing a lot of diesel-power/backup generation, which utilities do not monitor.”