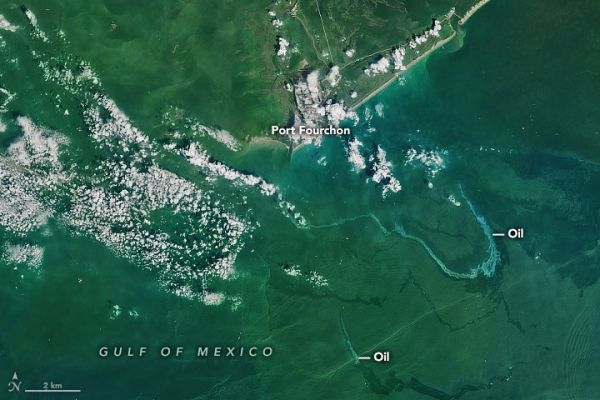 Federal and state agencies and private companies are working to find and contain oil leaks in the Gulf of Mexico.

Hurricane Ida left an extensive trail of damaged homes, infrastructure, and lives from Louisiana to New England. It also has left a stain on the sea. Two weeks after the storm, several federal and state agencies and some private companies are working to find and contain oil leaks in the Gulf of Mexico.

The U.S. Coast Guard has assessed more than 1,500 reports of pollution in the Gulf and in Louisiana, and it “is prioritizing nearly 350 reported incidents for further investigation by state, local, and federal authorities in the aftermath of Hurricane Ida.” The Coast Guard is working with the Environmental Protection Agency, the state of Louisiana, the National Ocean Service, and other agencies to chronicle and monitor the state of coastal waters and infrastructure.

On September 3, 2021, the Operational Land Imager (OLI) on Landsat 8 acquired this natural-color image of apparent oil slicks off the southeastern Louisiana coast near Port Fourchon, a major hub of the oil and gas industry.