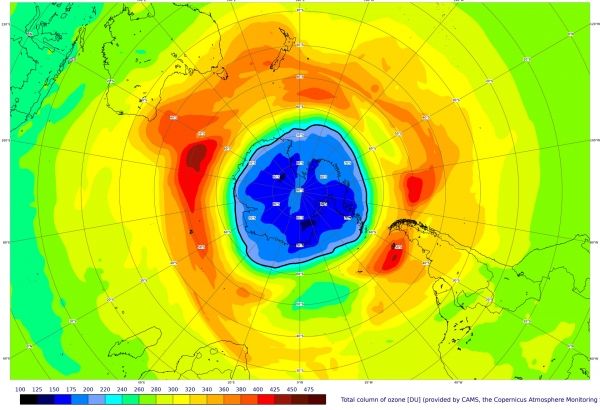 World governments agreed in the late 1980s to protect Earth’s ozone layer by phasing out ozone-depleting substances emitted by human activities, under the Montreal Protocol.

The phase out of these substances has not only helped protect the ozone layer for future generations but has also protected human health and ecosystems by limiting the harmful ultraviolet radiation from reaching Earth. On 16 September, the International Day for the Preservation of the Ozone Layer, we take a closer look at this year’s ozone hole.

The ozone layer in the atmosphere protects Earth from potentially harmful ultraviolet radiation. In the 1970s, scientists discovered that the ozone layer was being depleted.

Atmospheric conditions of ozone vary naturally depending on temperature, weather, latitude and altitude, while substances ejected by natural events such as volcanic eruptions can also affect ozone levels. However, these natural phenomena couldn’t explain the levels of depletion observed and it was discovered that certain human-made chemicals were the cause.