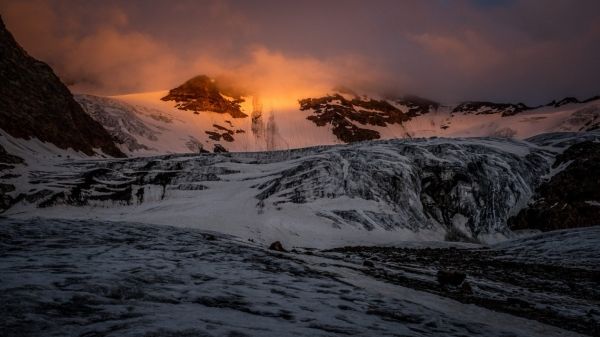 Like mountain glaciers worldwide, the glaciers of the Italian Alps are steadily melting away.

Like mountain glaciers worldwide, the glaciers of the Italian Alps are steadily melting away. Photographer Luigi Avantaggiato is documenting the disappearance of these magnificent rivers of ice, chronicling not just their wasting but also the impact of that melting on a pastoral way of life that has been intertwined with the glaciers for millennia.

In this photo essay, Avantaggiato focuses on the Forni Glacier, located between 8,500 and 12,000 feet in northeastern Italy. No other mountain range in the world has been as well studied for so long as the Alps — the Forni Glacier and nearby ice masses in Stelvio National Park have been the subject of more than a century of research. Relying on measurements and photographs dating back to the mid-19th century, scientists know that the Forni Glacier — the largest valley glacier in Italy — has retreated 3.3 kilometers (2 miles) since the peak of its advance around 1860. During that time, the total area of the Forni glacier has shrunk by nearly half.

The future looks even bleaker. With glacial melt in the Alps now rapidly accelerating, scientists forecast that the Forni Glacier will likely retain only 20 percent of its current volume by 2050 and could disappear altogether by the end of the century. A similar fate awaits glaciers throughout Europe, with half of the 4,000 glaciers in the Alps expected to disappear by 2050 and two-thirds expected to have lost all their ice by 2100, even if greenhouse gas emissions are cut to zero, according to a 2019 study.

The Forni glacier in the Italian Alps. The glacier has retreated 3.3 kilometers since the peak of its advance around 1860. (Photo Credit: Luigi Avantaggiato)