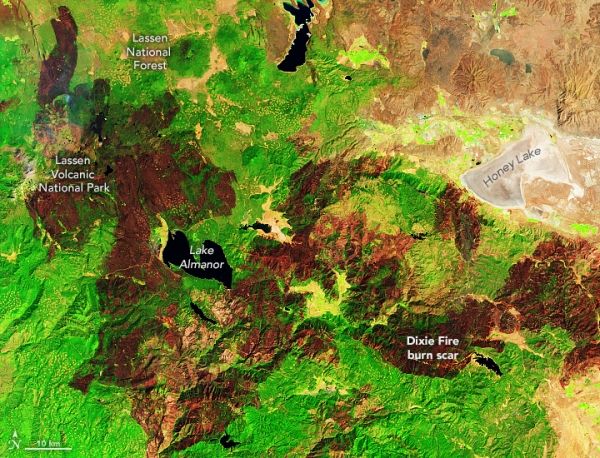 Heat waves and droughts supercharged by climate change, a century of fire suppression, and fast-growing populations have made large, destructive fires more likely.

If it seems like enormous wildfires have been constantly raging in California in recent summers, it's because they have. Eight of the state’s ten largest fires on record—and twelve of the top twenty—have happened within the past five years, according to the California Department of Forestry and Fire Protection (Cal Fire). Together, those twelve fires have burned about 4 percent of California’s total area—a Connecticut-sized amount of land.

Two recent incidents—the Dixie fire (2021, above) and the August fire complex (2020)—stand out for their size. Each of these burned nearly 1 million acres—an area larger than Rhode Island—as they raged for months in forests in Northern California. Several other large fires, as well as many smaller ones in densely populated areas, have proven catastrophic in terms of structures destroyed and lives lost. Thirteen of California’s twenty most destructive wildfires have occurred in the past five years; they collectively destroyed 40,000 homes, businesses, and pieces of infrastructure.