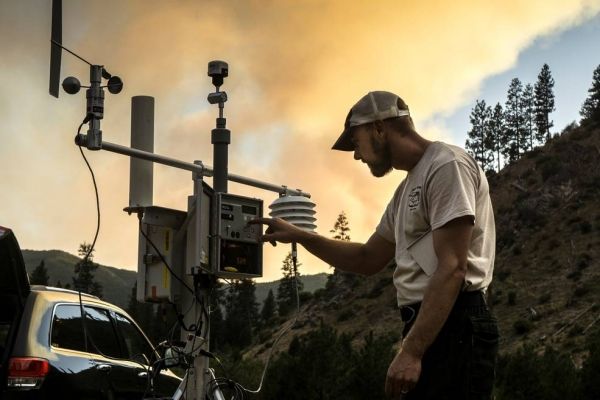 The U.S. Forest Service now has a powerful way to view near-real time fire detection from NASA satellite data that they can include in their hourly air quality forecasts.

A NASA-supported project created a new, experimental tool that incorporates near real-time fire detection data from satellites into hourly estimates of emissions to better track fire smoke as it billows into surrounding communities. Used for the first time in summer 2020, when historically large fires in California blanketed vast areas of the state in smoke for days, the technique is now being refined as a way to monitor smoke. As exceptional drought grips the western United States this summer, another active fire season is already underway.

Susan O’Neill and her team developed the data tool as part of NASA’s 2017 California Wildfires Tiger Team, an initiative within the Health and Air Quality Applied Sciences Team (HAQAST) of NASA's Earth Applied Sciences Program. O’Neill is the lead investigator and said that typically, computer models use fire size, type of vegetation burned, and current weather conditions to estimate how, when, and where the risk of smoke was greatest.

“When I was first shown this tool my head kind of exploded. It’s amazing,” said Leland Tarnay, an ecologist with the U.S. Forest Service’s Remote Sensing Lab. Tarnay used the data during the 2020 California Creek Fire, and said that having five-minute updates on a fire’s position was a vast improvement over some earlier methods that relied on the previous day’s fire activity. As smoke from fires has dangerous effects on public health and air quality, understanding its reach can help inform local decisions.