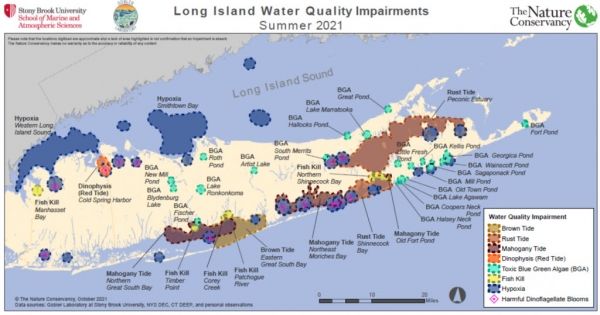 Stony Brook University scientists have completed their assessment of water quality in Long Island’s estuaries in 2021, and the news is not good.

During the months of June through October, every major bay and estuary across Long Island was afflicted by toxic algae blooms and oxygen-starved, dead zones. Excessive delivery of nitrogen from onsite wastewater has been cited as the cause of these disturbing events. The news was announced on October 7 at the Patchogue waterfront by Christopher J. Gobler, endowed chair of Coastal Ecology and Conservation at the School of Marine and Atmospheric Sciences (SoMAS) at Stony Brook University.

“It began with mahogany and brown tides in June and ended with a harmful rust tide that continues today across eastern Long Island,” said Gobler. “In between, a record-setting two dozen low oxygen dead zones were identified from Great Neck to East Hampton, over 20 lakes and ponds were affiliated with toxic blue-green algae blooms, and fish kills across another half dozen sites. This has become the new normal as Long Island deals with a dual assault of climate change and excessive nitrogen loading.”

Summer 2021 stood out as having nearly double the average rainfall total, with more rainfall coming during each individual storm. This may be the new normal as scientists predict Long Island will experience more precipitation in total in the future due to climate change. This excessive rainfall brings more nitrogen loading from land to sea, fueling harmful algal blooms and dead zones. For example, following tropical storms Henri and Ida, a mild rust tide expanded and intensified all across the east end of Long Island and the dead zones expanded across Long Island Sound and elsewhere.