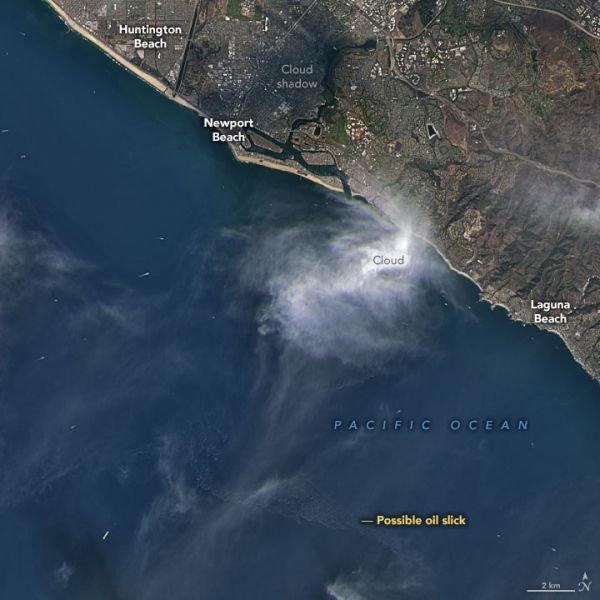 When oil leaks or spills into the ocean, the water surface changes. That may seem obvious to anyone who has watched polluted water stain a beach or marsh, but in the vast and deep blue ocean, oil is not always easy to spot. Some satellite imagers can make oil spills easier to detect in open water.

At least two satellites caught a glimpse of oil in the ocean off the coast of Southern California on October 2-3, 2021. The first image above is a natural-color view acquired at 11:22 a.m. Pacific Daylight Time (18:22 Universal Time) on October 3 by the Operational Land Imager (OLI) on Landsat 8. Amid clouds and haze, as well as white streaks from large cargo ships and boat wakes, hints of oil are faintly visible. Half a day earlier, the European Space Agency’s Sentinel-1B satellite acquired a radar image at 6:49 p.m. PDT on October 2 (01:49 UTC on October 3). The slick stands out better in this view.

Sentinel-1B uses synthetic aperture radar (SAR) to observe differences in the roughness of surfaces on Earth. The roughest surfaces appear brightest, while smoother surfaces appear dark. Oil makes the ocean smoother by reducing the size and number of “capillary waves” at the surface. (If the angle of sunlight is right, scientists can also use sunglint to trace large spills.)