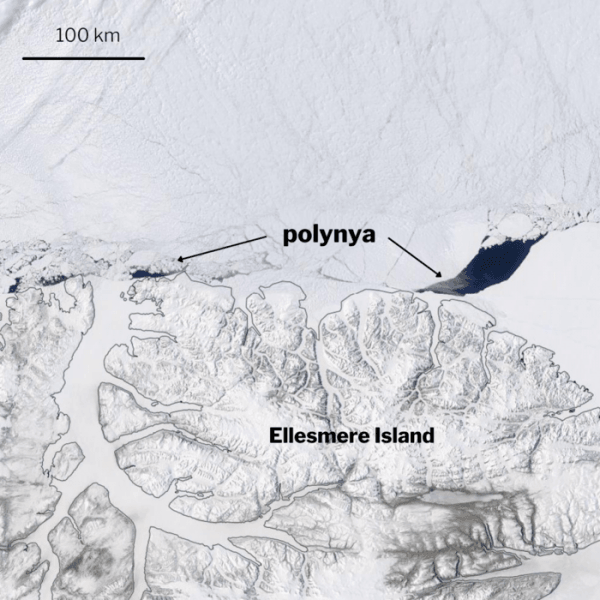 A new study documents the formation of a 3,000-square-kilometer rift in the oldest and thickest Arctic ice.

A new study documents the formation of a 3,000-square-kilometer rift in the oldest and thickest Arctic ice. The area of open water, called a polynya, is the first to be identified in an area north of Ellesmere Island, Canada’s northernmost island, and is another sign of the rapid changes taking place in the Arctic, according to researchers.

In May 2020, a hole a little smaller than the state of Rhode Island opened up for two weeks in the Last Ice Area, a million-square-kilometer patch of sea ice north of Greenland and Ellesmere Island that’s expected to be the last refuge of ice in a rapidly warming Arctic.

The polynya is the first one that has been identified in this part of the Last Ice Area, according to a new study detailing the findings in the AGU journal Geophysical Research Letters, which publishes high-impact, short-format reports with immediate implications spanning all Earth and space sciences.

The formation of the polynya was unusual because of its location, off the coast of Ellesmere Island, where the ice is up to five meters thick.

In May 2020, a 3,000 square kilometer polynya was observed north of Ellesmere Island for the first time. The rift formed in the Last Ice Area, expected to be the last bastion of sea ice in the warming Arctic. (Photo Credit: NASA EOSDIS Worldview)