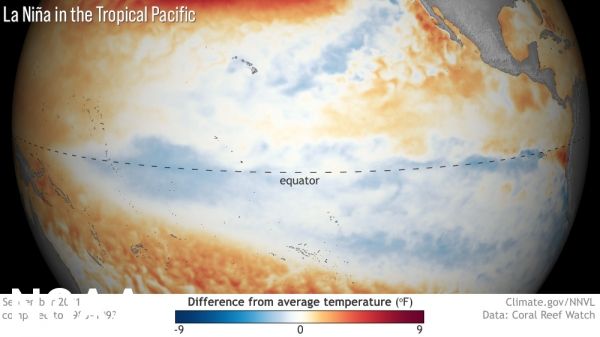 Climate pattern may influence remainder of hurricane season, winter ahead

A La Nina has developed and will extend through the second winter in a row according to NOAA’s Climate Prediction Center — a division of NOAA's National Weather Service. La Nina is a natural ocean-atmospheric phenomenon marked by cooler-than-average sea surface temperatures across the central and eastern Pacific Ocean near the equator and is translated from Spanish as “little girl.”

La Nina is one part of the El Nino Southern Oscillation (ENSO) cycle, which is characterized by opposing warm and cool phases of oceanic and atmospheric conditions in the tropical Pacific Ocean. Consecutive La Ninas following a transition through ENSO neutral conditions are not uncommon and can be referred to as a “double-dip.” In 2020, La Nina developed during the month of August and then dissipated in April 2021 as ENSO-neutral conditions returned.