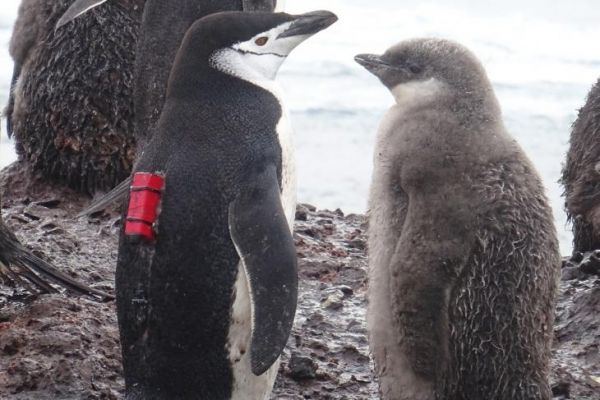 Researchers attached video cameras to penguins and obtained some of the first footage of penguins synchronously swimming, diving, and feeding for several hours.

A penguin’s plumage is often compared to a tuxedo. The comparison is fitting, considering that new data suggest penguins may be holding dinner parties more often than we know. Seabird biologists from the Southwest Fisheries Science Center recently obtained video footage of a group of chinstrap penguins as they went to sea in search of food. They discovered that these birds may stick tightly together for several hours while hunting for prey. The videographers weren’t the biologists, but the penguins themselves.

The researchers observed chinstrap penguins at the Cape Shirreff field camp during the 2019 summer breeding season—December in the southern hemisphere. Dr. Jefferson Hinke, head of seabird studies for the center’s Antarctic Ecosystem Research Division, and his research team attached small video cameras and depth recorders to the penguins. Hinke’s goal was to study how penguins interact with their prey while they’re on the hunt. The cameras remained attached to the penguins for approximately 24 hours before researchers recovered them.

The team got a happy surprise when they reviewed the video footage. They found that two penguins—both with cameras—in a group of three captured each other on video as they left the beach, swam, and repeatedly dove for food together during a single trip to sea. Their findings—some of the first to document synchronous diving and foraging in penguins—were recently published in the journal Marine Biology.