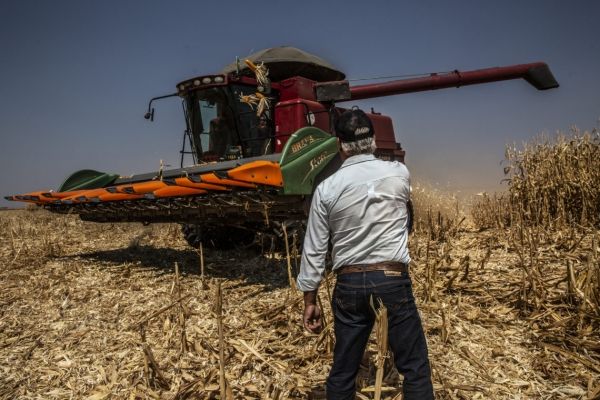 Algacir Schadeck snaps a fat ear of corn off a dry corn stalk in western Bahia, one of Brazil’s leading grain-producing regions.

Algacir Schadeck snaps a fat ear of corn off a dry corn stalk in western Bahia, one of Brazil’s leading grain-producing regions. Unfazed by a withering 103-degree F heat, he’s standing at the edge of a field more than half a mile across that bears 1,000 tons of corn. As the manager of Fazenda Rio Claro farm and the descendent of a long line of farmers, he knows what a good ear looks like. Unpeeling a husk dry as scorched paper, he pronounces the pumpkin-orange kernels perfect. “Very good quality,” he exults. “Very full. Very good.”

It’s September, the end of the region’s dry season, and it hasn’t rained in five months. The water that feeds this farm is pulled from the nearby Arrojado River, one of the region’s larger waterways, and sprayed over the fields using pivots — long pipes propped up on wheeled frames that rotate around a central point as they spray — each consuming millions of gallons every year. Fazenda Rio Claro’s pivots shower its crops with more than 500 million gallons of water annually, more than is used by the residents of Correntina, a nearby city with a population of 32,000.

Only a few decades ago, most of western Bahia, a flat plain roughly the size and shape of Portugal, was blanketed in a unique tropical savanna called cerrado — a mosaic of drought-resistant dry forest and grasslands. Since 1990, investors from around Brazil and abroad have converted about a quarter of western Bahia to cropland. This stunning transformation has made Brazil the world’s largest producer of soy and second largest exporter of cotton. Its water consumption has soared in step, thanks to efforts to feed crops during the dry season. Though only 8 percent of the plateau’s farmed acres are irrigated, hundreds of pivots now spray more than one cubic mile of water a year, a 150-fold increase since 1990.