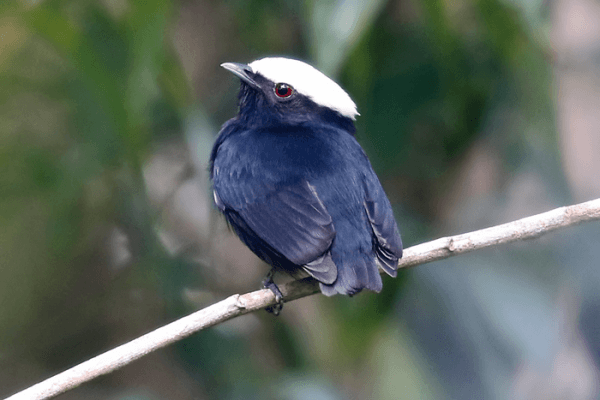 Study of a perky little bird suggests there may be far more avian species in the tropics than those identified so far.

Study of a perky little bird suggests there may be far more avian species in the tropics than those identified so far. After a genetic study of the White-crowned Manakin, scientists say it's not just one species and one of the main drivers of its diversity is the South American landscape and its history of change. These results are published in the journal Molecular Phylogenetics and Evolution.

"We found that the White-crowned Manakin probably originated in the highland forests of the Andes Mountains in northern Peru," explains lead author Jacob Berv. "Today, this bird is also found across the Amazon Basin, in the lowland rainforests of Brazil, Peru, and many other countries, including parts of Central America." Berv conducted this research while a Ph.D. student at the Cornell Lab of Ornithology and is currently a Life Sciences Fellow at the University of Michigan.

"This study shows that there is a lot of evolutionary history embedded in what is commonly referred to as a 'single widespread' species in Amazonia," says co-author Camila Ribas at Brazil's National Institute of Amazonian Research. "The White-crowned Manakin is an example of a phenomenon that is probably more the rule than the exception in Amazonia—diversity is vastly underestimated by the current taxonomy."