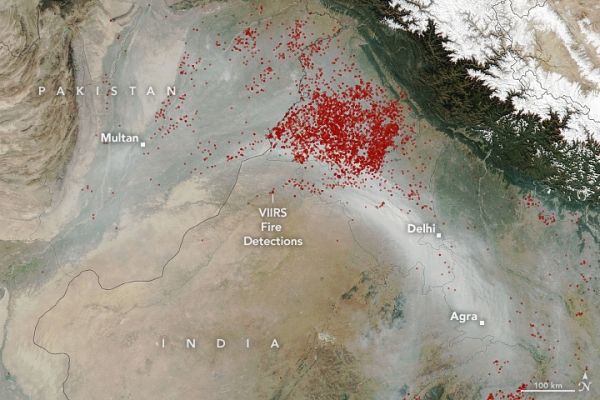 Smoke from crop fires in northern India blanketed the populous city and contributed to soaring levels of air pollution.

Every November, satellites detect large plumes of smoke and heightened fire activity in northwestern India as farmers burn off excess paddy straw after the rice harvest. Many farmers, particularly in the states of Punjab and Haryana, use fire as a fast, cheap way to clean up and fertilize fields before planting winter wheat crops. However, the surge of fires in the heart of the densely populated Indo-Gangetic Plain often contributes to a sharp deterioration of air quality in November and December.

Though lingering monsoon rains this year kept fire activity at low levels for a few weeks longer than usual, satellites observed elevated fire activity in November as the pace of burning accelerated. On November 11, 2021, the Visible Infrared Imaging Radiometer Suite (VIIRS) on the Suomi NPP satellite acquired this natural-color image of a river of smoke streaming from fires in Punjab and Haryana toward Delhi, one of India’s most populous cities. Use the image comparison slider to see the locations of hotspots observed by VIIRS that afternoon. Fires in northern Pakistan likely contributed some of the smoke as well.