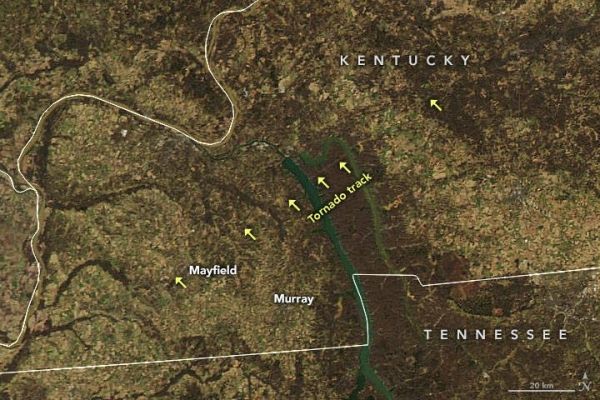 As people across the Midwestern U.S. take stock of the devastation from a Dec. 10 trail of tornados that blew across the region, data and images from NASA Earth-observing satellites aid first responders and recovery agencies in assessing the damage and help researchers understand the nature of these unusually powerful storms.

The natural-color image above that shows the tornado track across western Kentucky, which suffered some of the worst damage. The image was captured Dec. 12 by the Moderate Resolution Imaging Spectroradiometer on NASA’s Aqua satellite. Researchers also are using satellite data to study the supercell thunderstorms that spawned these tornados.

The scale of power outages in the region is also evident from images as seen here, comparing lights seen from space before and after the storm.