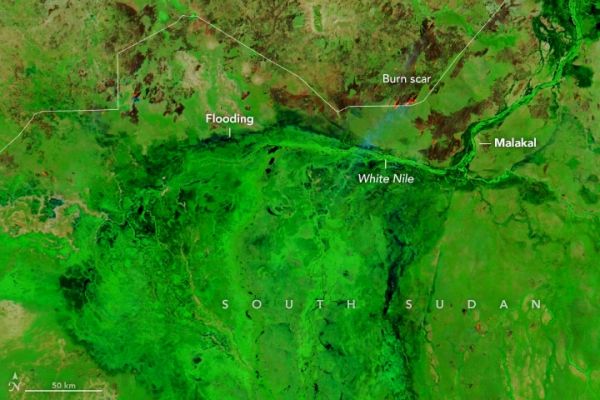 Three extreme rainy seasons in a row have pushed rivers and wetlands to heights not seen in decades.

Intense seasonal rains are a perennial challenge in South Sudan, but floods that swamped the northern part of the country in 2021 stand out. Water levels in some rivers and wetlands swelled to the highest levels observed by satellites in decades—then stayed that way for months. With more than 800,000 people affected and more than 200,000 forced from their homes, some observers are calling the 2021 floods the worst the country has seen in 60 years.

The images above show flooding in South Sudan’s Jonglei, Unity, and Upper Nile states on December 6, 2021 (right) compared to more typical conditions in December 2019 (left). These false-color images, acquired with the Moderate Resolution Imaging Spectroradiometer (MODIS) on NASA’s Aqua satellite, use a combination of infrared and visible light (bands 7-2-1) to make it easier to see the boundary between water and land. Water appears navy blue and black; saturated soil is light blue; clouds are white or cyan; and vegetation is bright green. In some areas, thick mats of floating vegetation made flooded areas appear green. In both years, multiple fires burned through grassland and savanna areas around the White Nile; they were likely set to maintain pastureland.