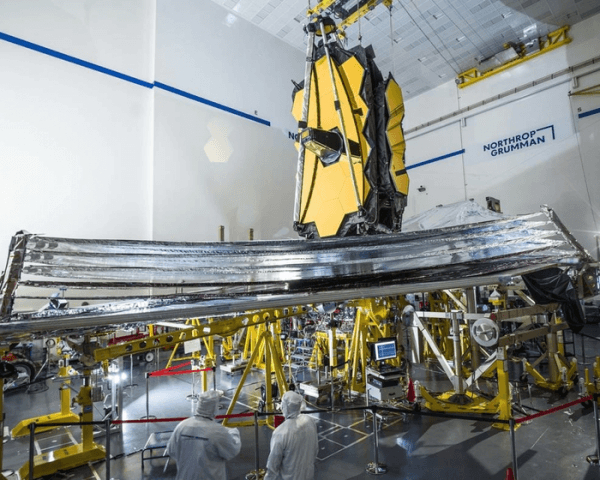 The James Webb Space Telescope team has fully deployed the spacecraft’s 70-foot sunshield, a key milestone in preparing it for science operations.

The James Webb Space Telescope team has fully deployed the spacecraft’s 70-foot sunshield, a key milestone in preparing it for science operations.

The sunshield – about the size of a tennis court at full size – was folded to fit inside the payload area of an Arianespace Ariane 5 rocket’s nose cone prior to launch. The Webb team began remotely deploying the sunshield Dec. 28, 2021, three days after launch.

NASA will hold a media teleconference at 12:45 p.m. EST today, Tuesday, Jan. 4, to discuss the completion of this critical step. To participate by telephone, media must RSVP to Laura Betz at: This email address is being protected from spambots. You need JavaScript enabled to view it.. Audio of the teleconference will also stream on the agency’s website.

“This is the first time anyone has ever attempted to put a telescope this large into space,” said Thomas Zurbuchen, associate administrator for NASA’s Science Mission Directorate at the agency’s headquarters in Washington. “Webb required not only careful assembly but also careful deployments. The success of its most challenging deployment – the sunshield – is an incredible testament to the human ingenuity and engineering skill that will enable Webb to accomplish its science goals.”

Image: On Jan. 4, 2022, engineers successfully completed the deployment of the James Webb Space Telescope’s sunshield, seen here during its final deployment test on Earth in December 2020 at Northrop Grumman in Redondo Beach, California. The five-layer, tennis court-sized sunshield is essential for protecting the telescope from heat, allowing Webb’s instruments to cool down to the extremely low temperatures necessary to carry out its science goals. (Credit: NASA/Chris Gunn)