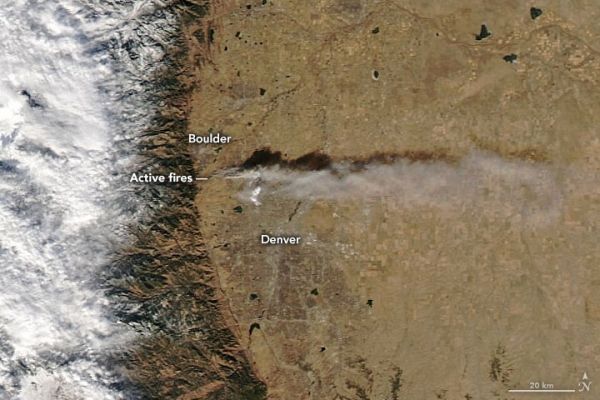 On December 30, 2021, high winds roared out of the west and down the front slope of the Rocky Mountains in Colorado. Northwest of Denver, peak gusts reached 115 miles (185 kilometers) per hour—the equivalent of a category 3 hurricane. Those winds whipped up intense grass and brush fires in south Boulder and blew them east toward the towns of Superior and Louisville, igniting a firestorm. By the time it was over, nearly 1,100 houses had been destroyed or damaged, two people were reported missing, and thousands were displaced.

The Marshall fire is now the most destructive in the state’s history. Four of the top five largest wildfires on record in Colorado occurred between 2018 and 2021.

Unlike many of the megafires in the American West in recent years—which typically occur in forests and wildlands—the Marshall fire quickly travelled into densely populated neighborhoods and transitioned from a wildfire to an urban conflagration.