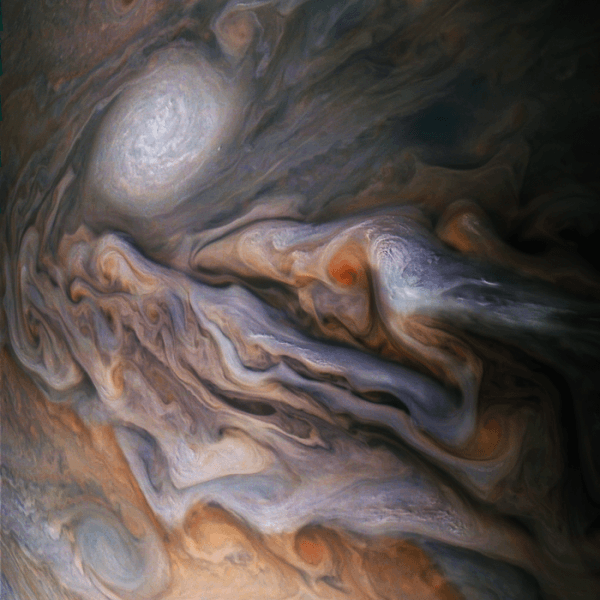 Hurtling around Jupiter and its 79 moons is the Juno spacecraft, a NASA-funded satellite that sends images from the largest planet in our solar system back to researchers on Earth.

Hurtling around Jupiter and its 79 moons is the Juno spacecraft, a NASA-funded satellite that sends images from the largest planet in our solar system back to researchers on Earth. These photographs have given oceanographers the raw materials for a new study published today in Nature Physics that describes the rich turbulence at Jupiter’s poles and the physical forces that drive the large cyclones.

Lead author Lia Siegelman, a physical oceanographer and postdoctoral scholar at Scripps Institution of Oceanography at the University of California San Diego, decided to pursue the research after noticing that the cyclones at Jupiter’s pole seem to share similarities with ocean vortices she studied during her time as a PhD student. Using an array of these images and principles used in geophysical fluid dynamics, Siegelman and colleagues provided evidence for a longtime hypothesis that moist convection – when hotter, less dense air rises – drives these cyclones.

“When I saw the richness of the turbulence around the Jovian cyclones with all the filaments and smaller eddies, it reminded me of the turbulence you see in the ocean around eddies,” said Siegelman. “These are especially evident on high-resolution satellite images of plankton blooms for example.”

A multitude of swirling clouds in Jupiter's dynamic North North Temperate Belt is captured in this image from NASA's Juno spacecraft. Appearing in the scene are several bright-white “pop-up” clouds as well as an anticyclonic storm, known as a white oval. This color-enhanced image was taken at 4:58 p.m. EDT on Oct. 29, 2018, as the spacecraft performed its 16th close flyby of Jupiter. (Photo Credit: Enhanced image by Gerald Eichstädt and Sean Doran (CC BY-NC-SA) based on images provided courtesy of NASA/JPL-Caltech/SwRI/MSSS)