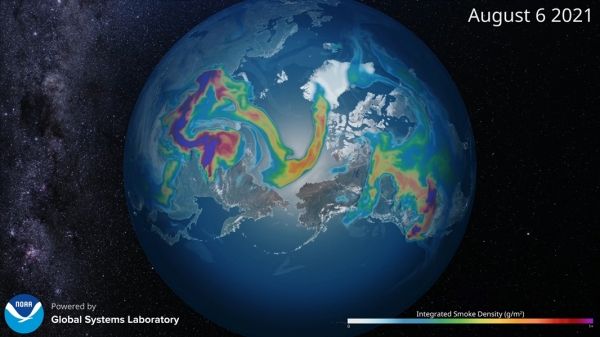 New research from NOAA and CIRES finds that wildfire smoke is much more widespread and plays a much bigger role in contributing to ozone pollution than previously thought.

Another record-breaking fire season across the western United States and Canada fouled skies as far downwind as Boston and New York City with wildfire smoke, visibly demonstrating the impacts that fires can have on air quality thousands of miles away. Now, new NOAA research demonstrates that the effects of fire emissions on the atmosphere are even larger and far more widespread than previously believed, and substantially contribute to one of the most common and harmful constituents of urban air pollution: ozone.

The study, published in the Proceedings of the National Academy of Sciences, relied on data collected during the 2016–2018 NASA Atmospheric Tomography Mission, which used NASA’s DC-8 flying laboratory to survey the most remote regions of the troposphere over the Pacific, Atlantic, Arctic, and Southern Oceans.

The scientific team, which included some of the world's top atmospheric researchers, found the signature of fire virtually everywhere, even in the most far-flung parts of the globe, something their chemical transport models failed to predict. Most surprising, however, was the realization that even in the heavily populated northern hemisphere, ozone from fire emissions was roughly equal to that from urban ozone sources, which are dominated by fossil fuel exhaust. In the less-heavily developed Southern Hemisphere and the Tropical Atlantic ozone attributed to fires outweighed that from urban sources by a factor of 2–10.