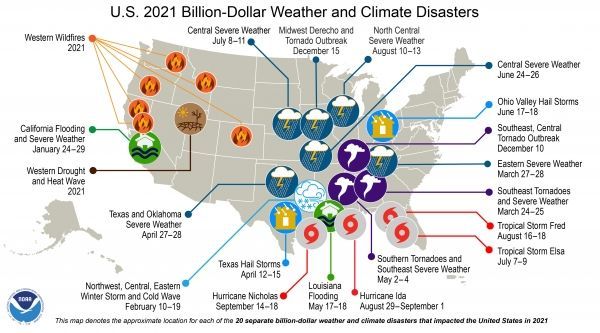 The year 2021 was marked by extremes across the U.S., including exceptional warmth, devastating severe weather and the second-highest number of billion-dollar weather and climate disasters on record.

The nation also saw an active wildfire year across the West as the north Atlantic Basin stayed busy with its third most-active Atlantic hurricane season on record, according to scientists from NOAA’s National Centers for Environmental Information. Here’s a recap of the climate and extreme weather events across the U.S. in 2021:

Climate by the numbers: December 2021 | Full year 2021
The December contiguous U.S. temperature was 39.3 degrees F, 6.7 degrees above average, making it the warmest December on record and exceeding the previous warmest December in 2015.