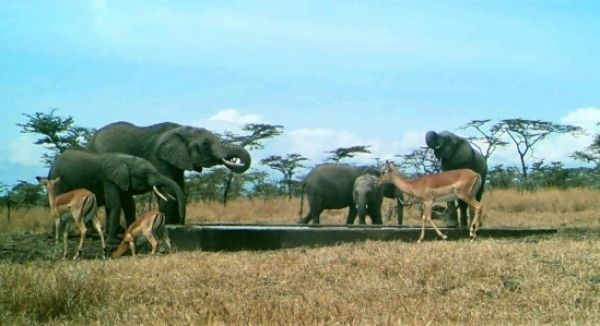 Watering holes bring together wildlife, and their parasites, on the plains of Africa

The sun rises on the savannas of central Kenya. Grasses sway in the wind as hoof-steps fall on the dusty ground. A menagerie of Africa’s iconic wildlife congregates around a watering hole to quench their thirst during the region’s dry season. But it’s not only the region’s herbivores and carnivores that are gathering at this waystation.

“We think about watering holes as being iconic centers of these majestic animals,” said UC Santa Barbara biologist Georgia Titcomb, “but they are also hotspots for the parasites that infect these animals.”

Resources bring organisms together, so Titcomb was curious how watering holes might affect the distribution and density of the savanna’s parasites. With help from citizen scientists, she and an international team of researchers discovered that parasite density is far higher around water sources than elsewhere in the landscape. While the jump in exposure risk varied among different host species, the team found it was two orders of magnitude greater for cattle and elephants in particular. The results, published in Nature Communications(link is external), provide ecological insights as well as potential applications in ranching and wildlife management.