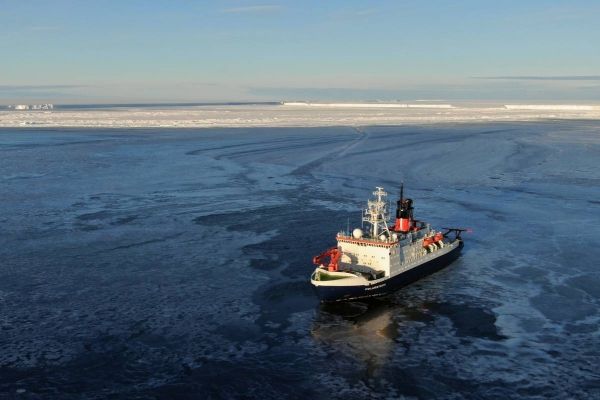 Near the Filchner Ice Shelf in the south of the Antarctic Weddell Sea, a research team has found the world's largest fish breeding area known to date.

Near the Filchner Ice Shelf in the south of the Antarctic Weddell Sea, a research team has found the world's largest fish breeding area known to date. A towed camera system photographed and filmed thousands of nests of icefish of the species Neopagetopsis ionah on the seabed. The density of the nests and the size of the entire breeding area suggest a total number of about 60 million icefish breeding at the time of observation. These findings provide support for the establishment of a Marine Protected Area in the Atlantic sector of the Southern Ocean. A team led by Autun Purser from the Alfred Wegener Institute publish their results in the current issue of the scientific journal Current Biology.

The joy was great when, in February 2021, researchers viewed numerous fish nests on the monitors aboard the German research vessel Polarstern, which their towed camera system transmitted live to the vessel from the seabed, 535 to 420 metres below the ship, from the seafloor of the Antarctic Weddell Sea. The longer the mission lasted, the more the excitement grew, finally ending in disbelief: nest followed nest, with later precise evaluation showing that there were on average one breeding site per three square metres, with the team even finding a maximum of one to two active nests per square metre.

The mapping of the area suggests a total extent of 240 square kilometres, which is roughly the size of the island of Malta. Extrapolated to this area size, the total number of fish nests was estimated to be about 60 million. "The idea that such a huge breeding area of icefish in the Weddell Sea was previously undiscovered is totally fascinating," says Autun Purser, deep-sea biologist at the Alfred Wegener Institute, Helmholtz Centre for Polar and Marine Research (AWI) and lead author of the current publication. After all, the Alfred Wegener Institute has been exploring the area with its icebreaker Polarstern since the early 1980s. So far, only individual Neopagetopsis ionah or small clusters of nests have been detected here.