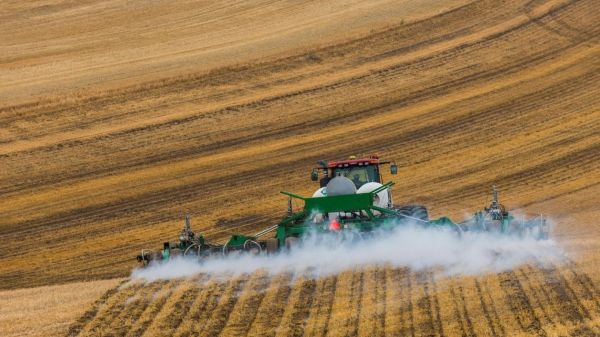 In Minnesota, there’s a research farm peppered with wind turbines that, when in full swing, boasts an astonishingly low carbon footprint.

In Minnesota, there’s a research farm peppered with wind turbines that, when in full swing, boasts an astonishingly low carbon footprint. The wind powers a chemical plant that makes ammonia, which can not only be spread as fertilizer under the turbines, but also fuels an experimental tractor, stores energy for a non-windy day, and — soon — will heat the barns that dry their grains. All without producing CO2.

“For deep decarbonization of agriculture, you switch to green ammonia,” says Michael Reese, director of the University of Minnesota project. The university’s studies have shown that using green ammonia (‘green’ in the sense that it is made with renewable energy) for fertilizer, fuel, and heat could drive down farming’s carbon footprint by as much as 90 percent for corn and small grain crops. “That’s transformative,” Reese says.

Advocates of this alternative, zero-carbon liquid fuel see green ammonia’s reach expanding far beyond farms. They predict a vast new market for green ammonia as a fuel, eventually outstripping the planet’s already enormous (and growing) demand for ammonia as fertilizer. A 2021 International Energy Agency report forecasts that to hit zero emissions by 2050, hydrogen-based fuels (including ammonia) should account for nearly 30 percent of transport fuels by 2050, up from basically zero today. That report predicts that cars will run on batteries and planes on biofuels, but ammonia will be vital for the shipping industry, which is currently responsible for 3 percent of global emissions and trying hard to whittle that down fast.