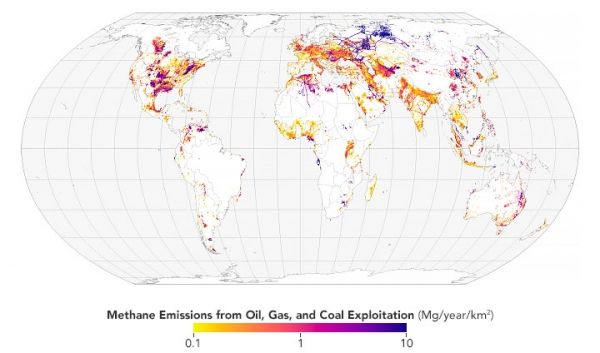 The amount of methane in Earth’s atmosphere has reached record levels in recent years. One of the major sources of emissions is the extraction, storage, and transportation of oil, natural gas, and coal, which results in the release of about 97 million metric tons of methane gas each year, according to the United Nations (U.N.). In a recent research project, scientists mapped where those emissions are coming from—not just by nations, but within them.

Methane is a potent greenhouse gas, trapping about 35 times more heat than carbon dioxide. The United States aims to reduce methane emissions 30 percent from 2020 levels by 2030, and other nations are making similar pledges.

Individual countries report their methane emissions by sector to the U.N. in accordance with the U.N. Framework Convention on Climate Change (UNFCCC). Most countries estimate their methane emissions using records of how much of each fossil fuel they produced each year, multiplied by an emissions factor provided by the Intergovernmental Panel on Climate Change (IPCC). And most governments only provide one number for emissions for each sector (oil, coal, gas) across the entire country.