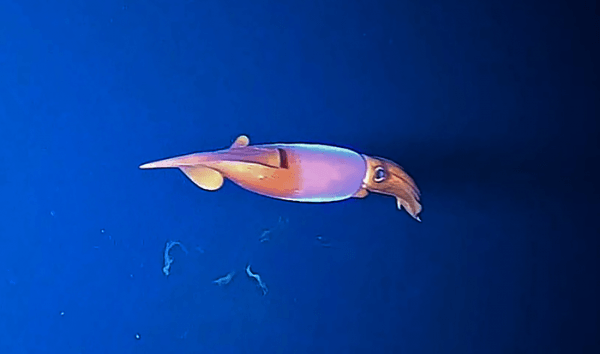 Single individuals of Atlantic cod and squid occur much further north than previously expected. Scientists participating in the international MOSAiC expedition with research icebreaker Polarstern have found fish and squid in deep water in the middle of the Arctic Ocean. The results from Stockholm University, the Alfred Wegener Institute and colleagues in the European Fisheries Inventory in the Central Arctic Ocean (EFICA) Consortium are published today in the scientific journal Science Advances.

Small fish occur at very low abundances in the 200-600 m deep Atlantic water layer of the Amundsen Basin as shown by the unique hydroacoustic dataset collected by the EFICA Consortium that showed a “deep scattering layer” (DSL) consisting of zooplanktion and fish along a 3170 km long track of the MOSAiC expedition.

Therefore, it was a big surprise when suddenly four larger fish were caught at 350–400 meters of depth. An even bigger surprise to the research team was that three of the fish were Atlantic cod, a predatory species that is not supposed to live this far north and, being a coastal fish, not in an four kilometers deep ocean basin more than 500 kilometers away from any coastline. With a deep-sea camera deployed underneath the sea ice, the scientists also discovered that Atlantic armhook squid and Atlantic lanternfish occur much further north than previously known.