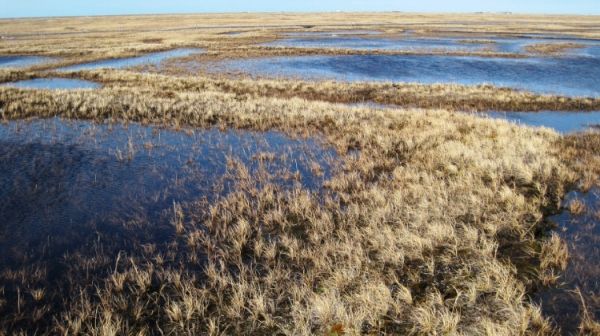 Permafrost — ground that has been permanently frozen for two or more years — makes up a large part of the Earth, around 15% of the Northern Hemisphere.

Permafrost — ground that has been permanently frozen for two or more years — makes up a large part of the Earth, around 15% of the Northern Hemisphere.

Permafrost is important for our climate, containing large amounts of biomass stored as methane and carbon dioxide, making tundra soil a carbon sink. However, permafrost's innate characteristics and changing nature are not broadly understood.

As global warming heats the Earth and causes soil thawing, the permafrost carbon cycle is expected to accelerate and release soil-contained greenhouse gases into the atmosphere, creating a feedback loop that will exacerbate climate change.

Remote sensing is one way of getting a handle on the breadth, dynamics, and changes to permafrost. "It's like a virtual passport to see this remote and difficult to reach part of the world," says Chandi Witharana, assistant professor of Natural Resources & the Environment at the University of Connecticut. "Satellite imaging helps us monitor remote landscape in a detailed manner that we never had before."

Over the past two decades, much of the Arctic has been mapped with extreme precision by commercial satellites. These maps are a treasure trove of data about this largely underexplored region. But the data is so large and unwieldy, it makes scholarship difficult, Witharana says.

With funding and support from the U.S. National Science Foundation (NSF) as part of the "Navigating the New Arctic" program, Witharana, as well as Kenton McHenry from the National Center for Supercomputing Applications, and Arctic researcher Anna Liljedahl of the Woodwell Climate Research Center, are making data about Arctic permafrost much more accessible.

Read more at: University of Texas at Austin

Using deep learning and supercomputers, researchers have been able to identify and map 1.2 billion ice wedge polygons in the Arctic permafrost based on satellite imagery. The data helps establish a baseline from which to detect changes to the region. (Photo Credit: Anna Liljedahl, Woodwell Climate Research Center)