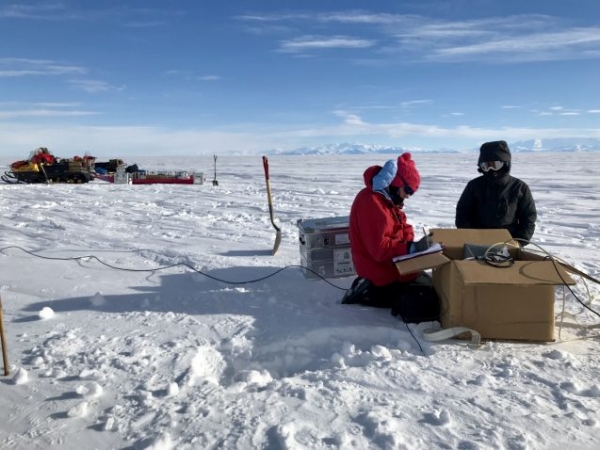 Many scientists say that liquid water is a key to understanding the behavior of the frozen form found in glaciers.

Many scientists say that liquid water is a key to understanding the behavior of the frozen form found in glaciers. Melt water is known to lubricate their gravelly bases and hasten their march toward the sea. In recent years, researchers in Antarctica have discovered hundreds of interconnected liquid lakes and rivers cradled within the ice itself. And, they have imaged thick basins of sediments under the ice, potentially containing the biggest water reservoirs of all. But so far, no one has confirmed the presence of large amounts of liquid water in below-ice sediments, nor studied how it might interact with the ice.

Now, a team from six research institutions has for the first time mapped a huge, actively circulating groundwater system in deep sediments in West Antarctica. They say such systems, probably common in Antarctica, may have as-yet unknown implications for how the frozen continent reacts to, or possibly even contributes to, climate change. The research appears today in the journal Science.

“People have hypothesized that there could be deep groundwater in these sediments, but up to now, no one has done any detailed imaging,” said the study’s lead author, Chloe Gustafson, who did the research as a graduate student at Columbia University’s Lamont-Doherty Earth Observatory. “The amount of groundwater we found was so significant, it likely influences ice-stream processes. Now we have to find out more and figure out how to incorporate that into models.”