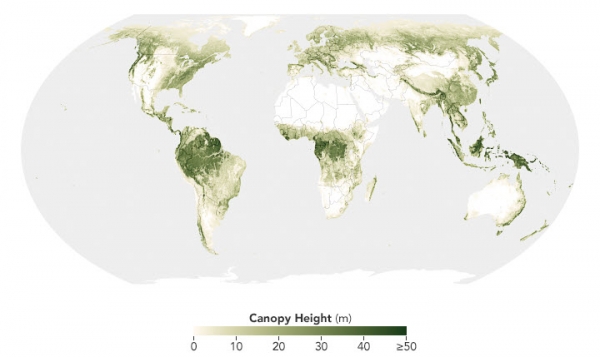 A new map shows the height of Earth’s forests, from stubby saplings to timbers towering more than 50 meters tall, across the entire land surface.

Every now and then, a new map changes the way we view our planet. This is one of those maps.

The map above shows the height of Earth’s forests, from stubby saplings to timbers towering more than 50 meters tall. It reveals some patterns you might expect, such as taller forests hugging the equator in the Amazon, central Africa, and Indonesia. But tall trees show up outside the tropics, too. For example, giant sequoias in California can grow to nearly 80 meters (260 feet) tall; Bhutan pines in the eastern Himalayas reach similar heights, exceeding the scale of this map.

But these astonishingly tall trees are the minority. According to a research team ledd by Nico Lang of the EcoVision Lab at ETH Zürich, only 5 percent of the Earth’s land area in 2020 was covered with trees standing taller than 30 meters.