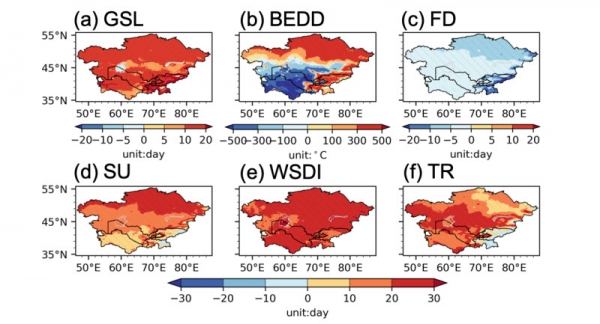 As one of the climate change hot spots, central Asia witnessed a significant warming in the past and is very likely to experience more heatwaves and drought events in the future.

Unfortunately, scientists have difficulty studying the potential impacts of future climate changes on many sectors in central Asia, in particular, ecological and hydrological systems, due to lack of high-resolution climate projection datasets.

To tackle this problem, the research group of Prof. FENG Jinming with the Institute of Atmospheric Physics at the Chinese Academy of Sciences produced a 9KM resolution climate projection dataset in central Asia based on dynamically downscaling results of multiple bias-corrected global climate models, which is called HCPD-CA for short. This dataset has two periods (1986-2005 and 2031-2050), utilizes the emission scenario RCP4.5, and includes four geostatic variables and ten meteorological elements, which can be used to drive most of the ecological and hydrological models. The related research article is published in Earth System Science Data.

In the article, the HCPD-CA dataset is evaluated at various time scales. The results show that the dataset has high accuracy in describing the historical climatology in central Asia. In addition, projected changes (2031-2050 vs. 1986-2005) in the ten meteorology elements are assessed. It is found that surface air temperature, downwelling shortwave and longwave radiation are expected to significantly increase, with minor changes in other elements.

Image via Chinese Academy of Sciences Institute of Atmospheric Physics