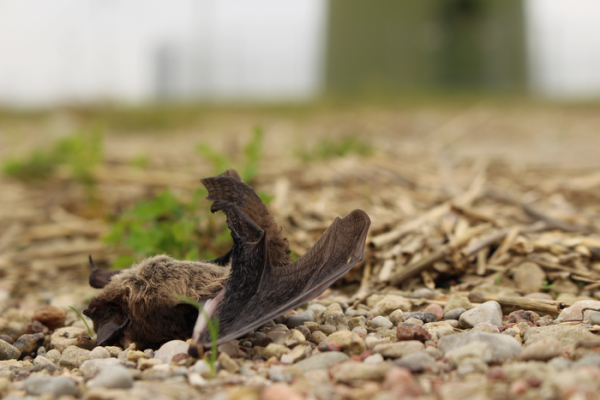 The numerous casualties of bats at wind turbines (WT) have a negative impact on the populations of affected species and potentially far-reaching consequences for the biodiversity in rural areas.

The numerous casualties of bats at wind turbines (WT) have a negative impact on the populations of affected species and potentially far-reaching consequences for the biodiversity in rural areas. Until now, it could only be assumed that the death of bats had further consequences. Now, a team of scientists from the Leibniz Institute for Zoo and Wildlife Research (Leibniz-IZW) show in a paper in the scientific journal "Conservation Science and Practice" that natural food chains are interrupted, which can have far-reaching negative consequences for agriculture and forestry. The study demonstrates the extent to which the functional importance of bats for habitats has been underestimated so far.

The scientists at the Leibniz-IZW investigated the prey spectrum of the common noctule (Nyctalus noctula), a common bat species that frequently dies at wind turbines in Germany. By focusing on the insects consumed by the bats, they documented the extent to which their functional importance for habitats is lost.

Carolin Scholz and Christian Voigt from the Leibniz-IZW investigated which insects common noctules consumed shortly before they died at wind turbines. For this purpose, they analysed the stomach contents of 17 common noctules killed at wind turbines. Using PCR amplification and high-throughput sequencing, the scientists searched for the genetic barcodes of the insects consumed by the bats. These genetic barcodes provide information about the identity of the consumed species. “We found DNA barcodes of 46 insect species from nine orders, most of them beetles and moths,” says Scholz, first author of the study. “The insect species could be assigned to a variety of different habitats, from farmland and grassland to forests and wetlands.” Twenty per cent of the identified insect species are considered pests or a nuisance in agriculture and forestry, for example the chestnut weevil (Curculio elephas) or the chestnut fruit moth (Cydia splendana). The scientists conclude that the loss of bats disrupts existing food chains and could therefore lead to higher numbers of pests and nuisance species, which might be compensated for by chemical pest control. The free ecosystem service of pest reduction by bats is reduced by wind turbines and therefore an emerging problem for agriculture and forestry.

Image: A killed bat under a wind turbine, a loss also for the rural food web as the bat did consume several species of insects. (Photo Credit: Christian Voigt/Leibniz-IZW)