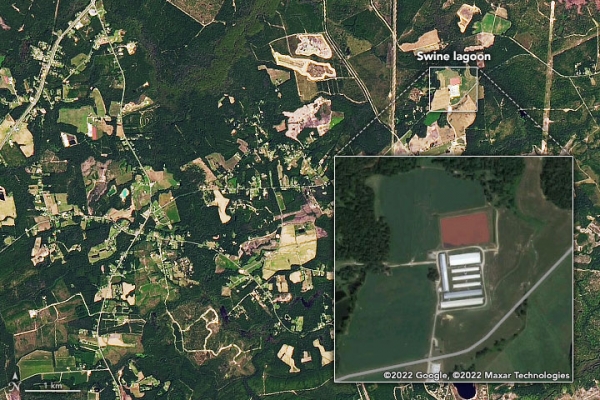 In North Carolina, there are almost as many swine as there are people. Those swine produce several million tons of manure every year, much of which gets stored and treated in outdoor “waste lagoons.”

The brown-pink waste lagoons have increasingly dotted eastern North Carolina’s landscape since the 1980s, as swine farms transitioned from raising animals on open land to raising them in concentrated animal feeding operations (CAFOs). The lagoons offer a place to store the waste while microbial communities break it down. The treated liquid slurry is sometimes disposed of by spraying it on nearby fields to be used as a fertilizer.

But over time, the excess nutrients from the waste—mostly nitrogen and phosphorus—can build up and disrupt the natural balance of soils, surface water, and groundwater. To better understand these potential “legacy effects” on the environment, scientists first need a more detailed picture of where the lagoons are located and how long they have been operating.