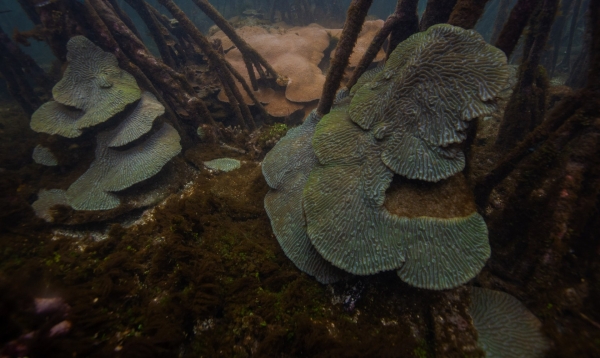 Tropical coral species may have found an alternative habitat where they can thrive in the face of climate change.

On any given day between 2016 and 2019, Heather Stewart could be found snorkeling in between mangroves in the Bocas del Toro archipelago along Panama’s Caribbean coast. For years she visited these forests at the interface between land and sea, trying to understand what drove corals to grow inside them. Corals and mangroves often grow near each other in tropical coastal environments, but finding them sharing the same habitat appeared to be an evolutionary trait that deserved an explanation.

The former doctoral fellow at the Smithsonian Tropical Research Institute (STRI) and now Mangrove Restoration Postdoctoral Associate at the University of the Virgin Islands, explored 29 sites where mangroves and corals coexist in Bocas, and found that the corals fared best in large, flooded mangrove forests with high levels of seawater flow. Meanwhile, areas with large amounts of freshwater inflow or higher levels of human impact —land development and pollution— were unsuitable for corals.

Mangrove-coral associations are not unique to Bocas del Toro or the Caribbean. Although not extensively studied, corals live in mangroves in tropical oceans in other parts of the world, including the Red Sea, Indian Ocean, and South Pacific.