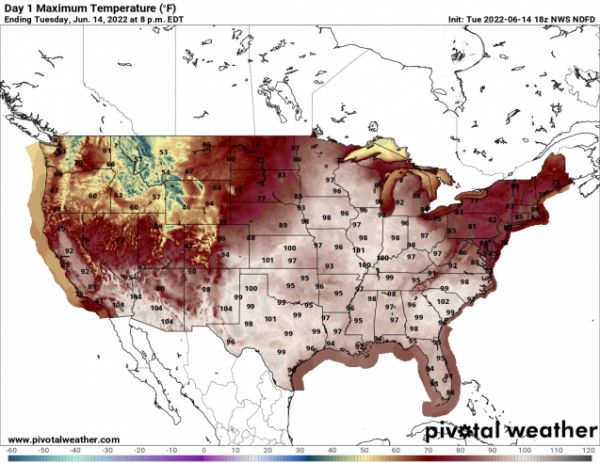 This summer is coming in hot.

This summer is coming in hot. The New York Times reports that a heat wave caused record-high temperatures this weekend in 16 cities from the Southwest to the Southern Plains. Now, the heatwave is traveling east to the Great Lakes, with more than 100 million Americans under heat alerts, according to the Washington Post. Across large swaths of the country, temperatures are reaching the triple digits.

For many, hot temperatures are a fun excuse to go to the beach. But for vulnerable populations — such as children, outdoor workers, the elderly, and those who can’t afford air conditioning — heat waves like this can be very dangerous.

In fact, heat is the leading weather-related killer in the United States. It is estimated that between 600 and 1,300 Americans die every year as a result of extreme heat — much higher than deaths from hurricanes, which have killed an average of 118 Americans since 2000. Yet hurricanes tend to receive a lot more attention.

What makes heat waves so dangerous? Why do we underestimate their dangers, and what can we do about it? To learn more, State of the Planet spoke with Robbie Parks, an environmental epidemiologist at Columbia University’s Mailman School of Public Health. Parks studies the connections between climate change, weather, and public health.

Maximum temperatures across the United States for June 14, 2022. White and gray indicate temperatures in the triple digits. (Photo Credit: Pivotal Weather, based on data from the National Weather Service)