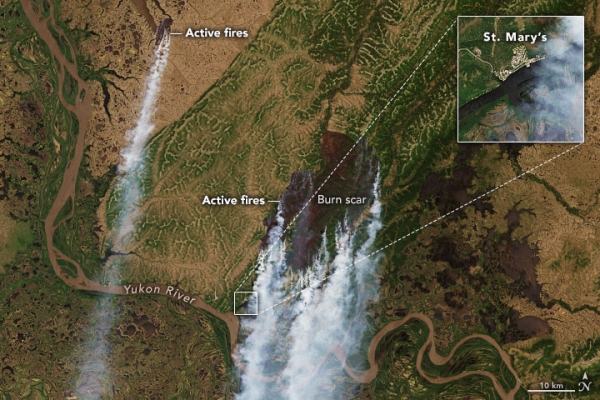 Dozens of wildfires, including the largest tundra fire on record for the Yukon, are burning across the state.

On June 4–5, 2022, thunderstorms moved across south-central and southwest Alaska, delivering nearly 5,000 lightning strikes and igniting dozens of wildfires. It was the latest outbreak in an unusually active fire season so far.

As of June 14, 2022, there were 85 active fires burning across the state. More than half of them were burning in southwest Alaska, which is shown in a natural-color image (above) acquired on June 10, 2022, by the Moderate Resolution Imaging Spectroradiometer (MODIS) on NASA’s Aqua satellite.

In the Yukon Delta, the East Fork fire has become the largest tundra fire on record. Ignited on May 31 by a lightning strike, it has burned more than 150,000 acres along the Yukon River north of the village of St. Mary’s.

In the detailed image below, acquired by the Operational Land Imager (OLI) on Landsat 8, smoke is billowing from the East Fork fire and the Apoon Pass fire, which has burned about 15,000 acres.