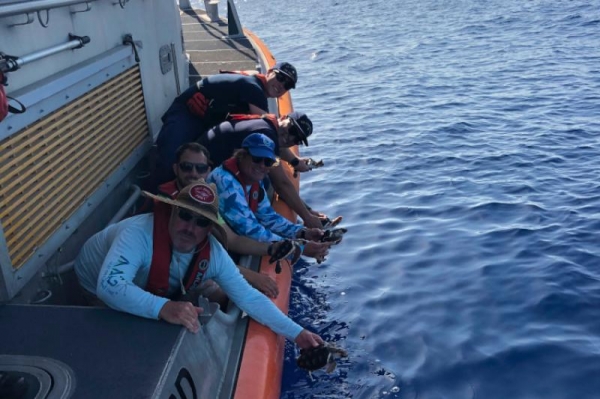 Juvenile sea turtles returned to the wild after study to reduce bycatch.

NOAA Fisheries scientists and the Florida Fish and Wildlife Conservation Commission released 85 loggerhead sea turtles into the ocean off Florida’s east coast. The turtles were raised in captivity as part of a one-of-a-kind program. It tests the success of devices used during commercial fishing operations to reduce sea turtle bycatch and mortality.

The turtles are part of 2-weeks of testing that took place near Panama City, Florida in mid-June. Scientists from NOAA’s Southeast Fisheries Science Center evaluate the effectiveness of turtle excluder devices (TEDs) in shrimp trawls.

TEDs are the part of a shrimp trawl that enable sea turtles to escape from fishing nets, while minimizing shrimp loss. They are required by law, as part of an effort to increase sea turtle populations. During the testing, divers observe and record sea turtles' behavior to document how well they can escape from TED‑equipped shrimp trawls—all in less than 5 minutes.