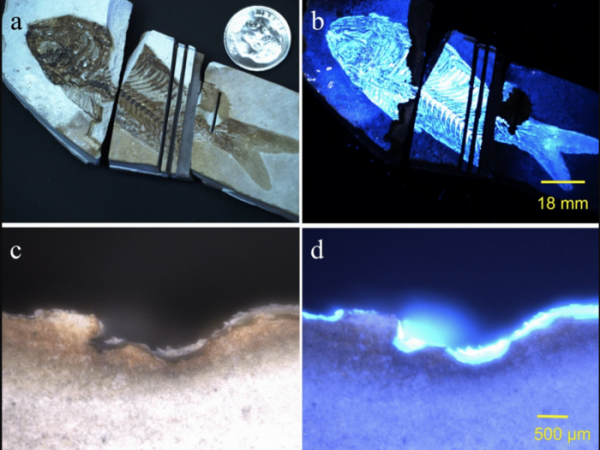 An innovative scientific instrument may be a game changer in the search for signs of extraterrestrial life.

An innovative scientific instrument may be a game changer in the search for signs of extraterrestrial life. The Compact Color Biofinder, developed by University of Hawaiʻi at Mānoa researchers, can accurately detect the bio-residue in fish fossils from the 34–56 million-year-old Green River rock formation.

The search for extraterrestrial life—which may be existing or fossilized—on planetary bodies is one of the major goals of planetary exploration missions conducted by NASA and other international space agencies.

Most biological materials, for example, amino acids, fossils, sedimentary rocks, plants, microbes, proteins and lipids, have strong organic fluorescence signals that can be detected by specialized scanning cameras. The researchers used fossils from ancient life on Earth as an analogue sample to test the instrument’s ability to detect biomarkers in extinct life. The findings are published in Nature Scientific Reports.

“The Biofinder is the first system of its kind,” said Anupam Misra, lead instrument developer and researcher at the Hawai‘i Institute of Geophysics and Planetology at the UH Mānoa School of Ocean and Earth Science and Technology (SOEST). “At present, there is no other equipment that can detect minute amounts of bio-residue on a rock during the daytime. Additional strengths of the Biofinder are that it works from a distance of several meters, takes video and can quickly scan a large area.”