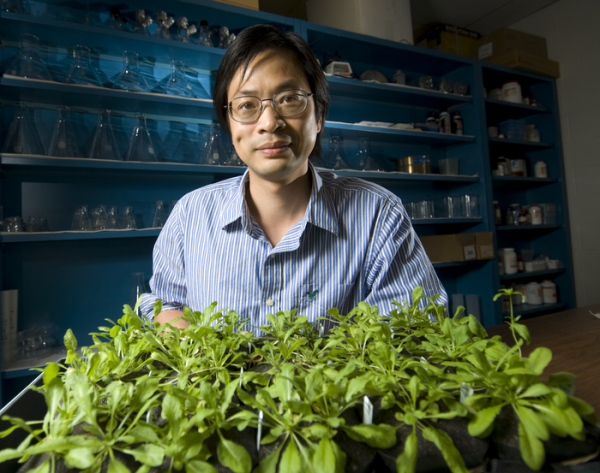 To keep food on the table in a warming world, researchers are bolstering plant immunity against the heat.

To keep food on the table in a warming world, researchers are bolstering plant immunity against the heat.

When heat waves hit, they don’t just take a toll on people -- the plants we depend on for food suffer too. That’s because when temperatures get too high, certain plant defenses don’t work as well, leaving them more susceptible to attacks from pathogens and insect pests.

Now, scientists say they have identified a specific protein in plant cells that explains why immunity falters as the mercury rises. They’ve also figured out a way to reverse the loss and bolster plant defenses against the heat.

The findings, published June 29 in the journal Nature, were found in a spindly plant with white flowers called Arabidopsis thaliana that is the “lab rat” of plant research. If the same results hold up in crops too, it would be welcome news for food security in a warming world, said Duke University biologist and corresponding author Sheng-Yang He.

Image: Heat waves make it harder for crops and other plants to fight disease. New research led by Duke’s Sheng-Yang He not only reveals what knocks plant defenses down when things warm up, but also how to bring them back. (Credit: Michigan State University)