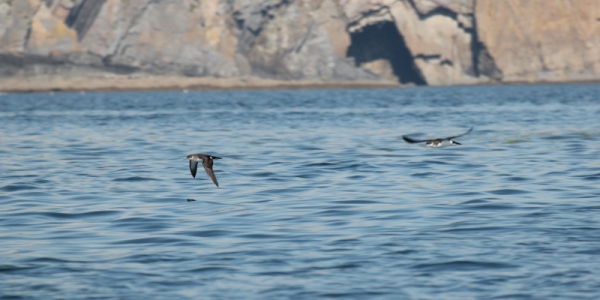 University College Cork (UCC) researchers have found that that cloudier waters, caused in part by climate change, is making it harder for seabirds to catch fish.

University College Cork (UCC) researchers have found that that cloudier waters, caused in part by climate change, is making it harder for seabirds to catch fish.

On Little Saltee, a small island off the south-east coast of Ireland, researchers attached tiny trackers to the feathers of Manx shearwaters. The aim of the study, published in Proceedings of the Royal Society B, was to understand how underwater visibility affects seabirds’ ability to forage for fish and other prey. It is the first study to examine the impact of ocean clarity on seabirds’ diving abilities.

Climate change is leading to the oceans becoming cloudier

Jamie Darby, a marine ecologist in UCC's School of Biological Environmental and Earth Sciences and MaREI, the Science Foundation Ireland Research Centre for Energy, Climate and Marine at UCC, and lead author of the study, stated “The chemical and physical properties of the planet’s oceans are changing at an unnatural rate, bringing about challenges for marine life. One consequence of climate change is that large areas of our oceans are becoming cloudier.”

Darby and the research team investigated the diving patterns of the black and white Manx shearwaters in relation to local environmental conditions like cloud cover and water clarity. Over 5000 different dives were recorded and using publicly available databases, and a range of relevant information about weather patterns and ocean conditions were amassed.