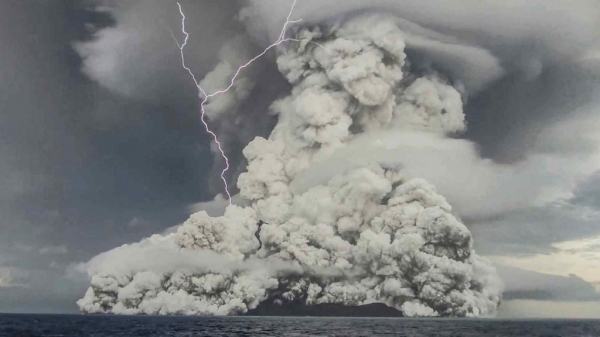 When a volcano in the South Pacific Ocean erupted in January 2022, NOAA researchers were well-equipped to study the multi-hazard event by sky and by sea. Key technologies and strategic partnerships made it possible for NOAA to issue warnings that saved lives around the world, while also collecting scientific data that will improve forecasting models and disaster response for future events.

Blasts from the Hunga Tonga – Hunga Ha’apai volcano launched ash and toxic gas high into the stratosphere to altitudes above 30 km. The plume of material formed an umbrella cloud 500 km wide and triggered record-breaking amounts of lightning strikes. The violent eruption provided a rare opportunity for scientists to learn more about sulfur dioxide gas emissions in the stratosphere

As the sulfur plume traveled westward, researchers from NOAA Chemical Sciences Laboratory, CIRES, and the University of Houston gathered on La Réunion island in the Indian Ocean, about 8,000 miles away from the initial volcanic blast. The plan was to use specially-designed balloons to lift lightweight aerosol sensors high up into the stratosphere, where they could collect air quality data as the plume passed overhead. NOAA’s satellites tracked the movement of the volcanic cloud, and the scientific team worked quickly to prepare.