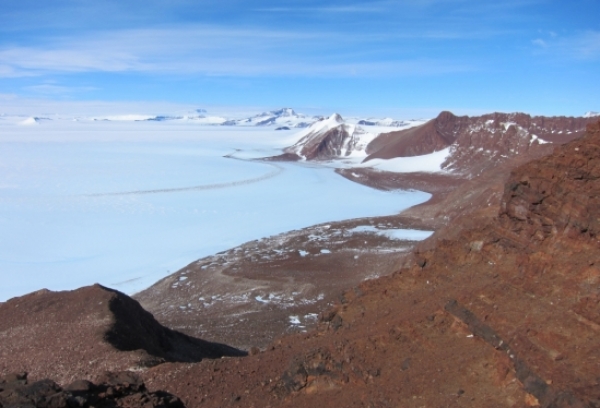 Let’s pretend it’s the Late Cretaceous, roughly 66 to 100 million years ago. We’ve got dinosaurs roaming the land and odd-looking early species of birds, although the shark as we know it is already swimming in the prehistoric oceans — which cover 82% of Earth. Redwood trees and other conifers are making their debut, as are roses and flowering plants, and with them come bees, termites and ants. Most of all, it’s warm, volcanically active and humid all over the place with nary an ice sheet in sight.

Except, according to a group of scientists from UC Santa Barbara, University of Oregon and University of Manitoba, icy conditions did exist in the region of the South Pole.

“And it wasn’t just a single-valley glacier,” said UCSB geologist John Cottle(link is external), “it was probably multiple glaciers or a large ice sheet.” Contrary to our widely held picture of the Late Cretaceous as “hot everywhere,” he said, there’s evidence that polar ice existed during that period, even at the height of global greenhouse conditions. The geologists’ study(link is external) is published in the journal Nature Communications.

Stark and beautiful, parts of Antarctica may have looked much the same in the Late Cretaceous (Photo Credit: Courtesy Image)