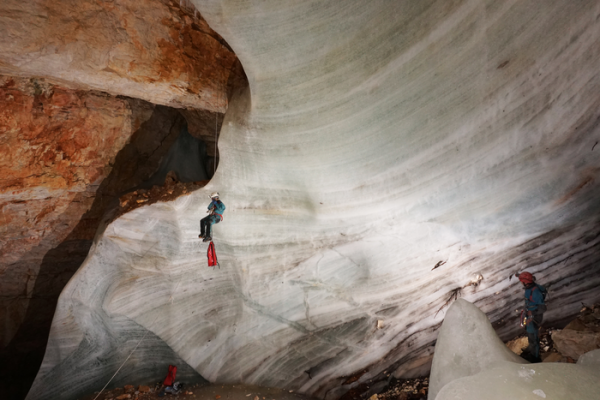 There are several thousand documented ice caves worldwide, and Austria is one of the countries with the highest density of ice caves - but only a few have been studied in detail.

There are several thousand documented ice caves worldwide, and Austria is one of the countries with the highest density of ice caves - but only a few have been studied in detail. Over the past few years, a team of researchers from the Universities of Innsbruck and Belfast has now analysed in detail eight ice caves with a descending morphology in Tyrol, Styria, Upper Austria and Carinthia, choosing a comparative research approach. "There are already some good studies on single ice caves. However, this was the first time a comparative analysis was carried out and we focused on the ice development in several caves that are also in comparable settings: similar altitude and a steep to vertically sloping geometry," explains Tanguy Racine from the Quaternary Research Group around Christoph Spötl at the Department of Geology. His dissertation dealt with the topic in detail. Ice bodies in these caves are formed from solid precipitation: snow falls and slides into the cave in winter and then subsequently turns to ice to low temperatures.

Using the radiocarbon method, the team determined the age of the ice layers in the caves, which are often many metres thick: "To date the ice, we focused on the tiniest inclusions of wood in the ice layers. The age of these wood fragments, which fell into the caves from the outside, can be determined precisely," Tanguy Racine explains the procedure. The large database of a total of 107 dates of wood inclusions from the ice draws an accurate picture of the increase and decrease of ice in the ice caves - the so-called mass balance - and this over a period of up to 2000 years in the past. This approach enabled the team to prove the hypothesis that historically documented glacier advances, such as during the "Little Ice Age", are also represented in the increase in ice mass in ice caves and coincide in time. " We can document comparable ups and downs in the development of ice in ice caves and glaciers for the period of the last two millennia. For both, it is essential how much snow falls in winter and how warm the summers are. The results also show us that a large part of the underground ice in Austria originates from the "Little Ice Age" between about the 15th and 19th centuries," says the geologist.

Read more at: University of Innsbruck

The Eisgruben Eishöhle in Upper Austria is one of the eight caves studied in Austria. It lost 10 metres of ice in 40 years. (Photo Credit: Christoph Spötl)