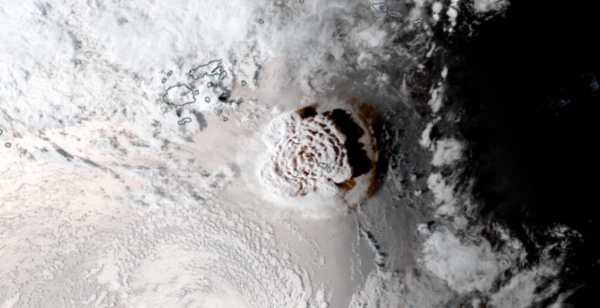 The catastrophic eruption of the Hunga Tonga–Hunga Ha’apai volcano in 2022 triggered a special atmospheric wave that has eluded detection for the past 85 years.

The catastrophic eruption of the Hunga Tonga–Hunga Ha’apai volcano in 2022 triggered a special atmospheric wave that has eluded detection for the past 85 years. Researchers from the University of Hawai‘i (UH) at Mānoa, Japan Agency for Marine–Earth Science and Technology (JAMSTEC), and Kyoto University relied on state-of-the-art observational data and computer simulations to discover the existence of Pekeris waves—fluctuations in air pressure that were theorized in 1937 but never proven to occur in nature, until now.

The eruption in the South Pacific earlier this year released what was likely the most powerful explosion the world has experienced since the famous 1883 eruption of Mt. Krakatau in Indonesia. The rapid release of energy excited pressure waves in the atmosphere that quickly spread around the world.

The atmospheric wave pattern close to the eruption was quite complicated, but thousands of miles away the disturbances were led by an isolated wave front traveling horizontally at over 650 miles an hour as it spread outward. The air pressure perturbations associated with the initial wave front were seen clearly on thousands of barometer records throughout the world.