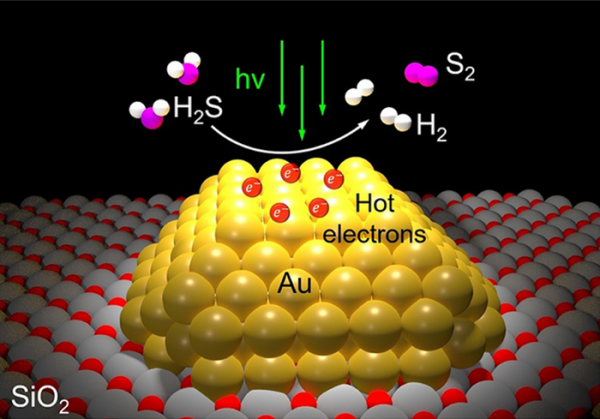 Hydrogen sulfide gas has the unmistakable aroma of rotten eggs.

Hydrogen sulfide gas has the unmistakable aroma of rotten eggs. It often emanates from sewers, stockyards and landfills, but it is particularly problematic for refineries, petrochemical plants and other industries, which make thousands of tons of the noxious gas each year as a byproduct of processes that remove sulfur from petroleum, natural gas, coal and other products.

In a published study in the American Chemical Society’s high-impact journal ACS Energy Letters, Rice engineer, physicist and chemist Naomi Halas and collaborators describe a method that uses gold nanoparticles to convert hydrogen sulfide into high-demand hydrogen gas and sulfur in a single step. Better yet, the one-step process gets all its energy from light. Study co-authors include Rice’s Peter Nordlander, Princeton University’s Emily Carter and Syzygy Plasmonics’ Hossein Robatjazi.

“Hydrogen sulfide emissions can result in hefty fines for industry, but remediation is also very expensive,” said Halas, a nanophotonics pioneer whose lab has spent years developing commercially viable light-activated nanocatalysts. “The phrase ‘game-changer’ is overused, but in this case, it applies. Implementing plasmonic photocatalysis should be far less expensive than traditional remediation, and it has the added potential of transforming a costly burden into an increasingly valuable commodity.”