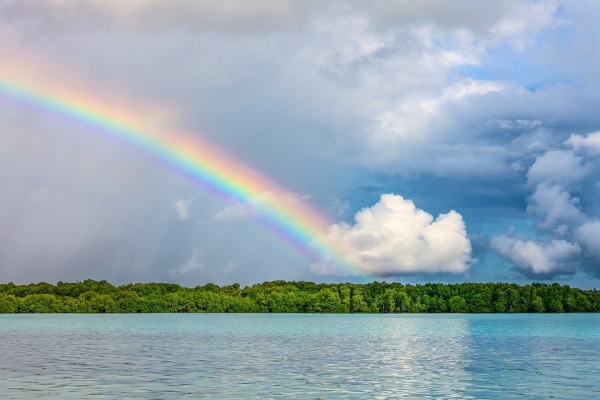 Climate change will increase opportunities to see rainbows, according to a new study led by researchers at the University of Hawai‘i (UH) at Mānoa.

Climate change will increase opportunities to see rainbows, according to a new study led by researchers at the University of Hawai‘i (UH) at Mānoa. The study’s authors estimate that by 2100, the average land location on Earth will experience about 5% more days with rainbows than at the beginning of the 21st century. Northern latitudes and very high elevations, where warming is predicted to lead to less snow and more rain, will experience the greatest gains in rainbow occurrence. However, places with reduced rainfall under climate change—such as the Mediterranean—are projected to lose rainbow days.

Rainbows are produced when water droplets refract sunlight. Sunlight and rainfall are therefore essential ingredients for rainbows. Human activities such as burning fossil fuels are warming the atmosphere, which changes patterns and amounts of rainfall and cloud cover.

“Living in Hawai‘i, I felt grateful that stunning, ephemeral rainbows were a part of my daily life,” said the lead author of the study, Kimberly Carlson, who is now at New York University’s Department of Environmental Studies. “I wondered how climate change might affect such rainbow viewing opportunities.”

Camilo Mora, at the UH Mānoa Geography and Environment department, was intrigued by the question and pitched it as the focus of a project for one of his graduate courses.