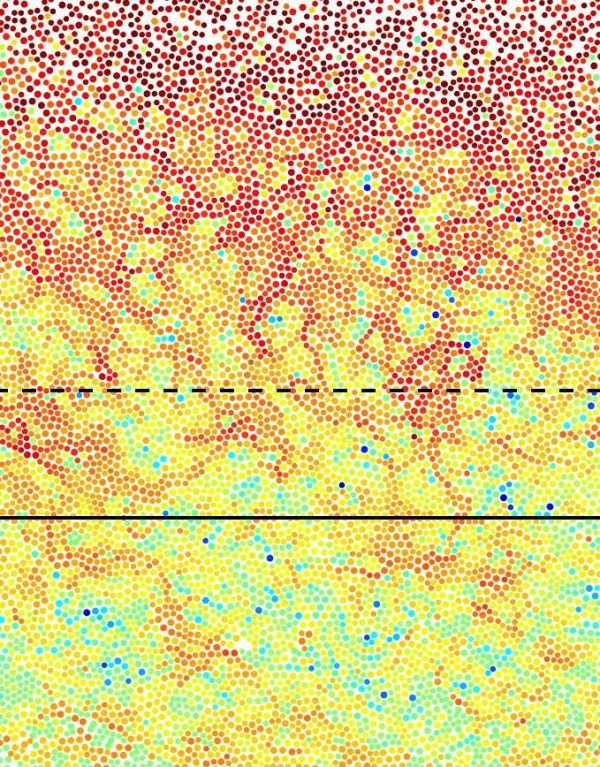 In 1842, the famous British researcher Michael Faraday made an amazing observation by chance: A thin layer of water forms on the surface of ice, even though it is well below zero degrees.

In 1842, the famous British researcher Michael Faraday made an amazing observation by chance: A thin layer of water forms on the surface of ice, even though it is well below zero degrees. So the temperature is below the melting point of ice, yet the surface of the ice has melted. This liquid layer on ice crystals is also why snowballs stick together.

It was not until about 140 years later, in 1985, that this "surface melting" could be scientifically confirmed under controlled laboratory conditions. By now, surface melting has been demonstrated in a variety of crystalline materials and is scientifically well understood: Several degrees below the actual melting point, a liquid layer only a few nanometres thick forms on the surface of the otherwise solid material. Because the surface properties of materials play a crucial role in their use as, e.g. catalysts, sensors, battery electrodes and more, surface melting is not only of fundamental importance but also in view of technical applications.

It must be emphasized that this process has absolutely nothing to do with the effect of, say, taking an ice cube out of the freezer and exposing it to ambient temperature. The reason why an ice cube melts on its surface first under such conditions is that the surface is significantly warmer than the ice cube's interior.

Read more at University of Konstanz

Image: Microscope image of surface melting of glass in a colloidal system. Highly mobile particles (red) mark the melting process at the surface. Remarkable is the fact that these highly dynamic regions extend far into the material and thus influence its properties. Image: research team Bechinger, University of Konstanz