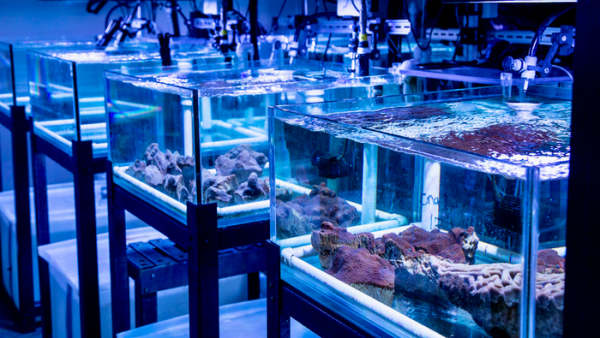 A new study suggests that ships may be spreading a deadly coral disease across Florida and the Caribbean.

A new study suggests that ships may be spreading a deadly coral disease across Florida and the Caribbean. The findings by scientists at the University of Miami (UM) Rosenstiel School of Marine, Atmospheric, and Earth Science could help establish testing and treatment methods to mitigate the risk of further disease spread.

Stony coral tissue loss disease, or SCTLD, was first observed near Miami in 2014 and has since spread throughout all of Florida’s Coral Reef and into the Caribbean, including in waters off Jamaica, St. Maarten, U.S. Virgin Islands, and Belize.

Researchers suggest that transport through ship hulls, where the vessel take on ballast water in one region to keep it stable and release it at a different port, may have contributed to disease spread.

Coral colonies of the species Colpophyllia natans and Orbicella faveolata maintained in the Experimental Reef Laboratory aquarium systems. These corals were rescued from a seawall collapse at Star Island in July 2022, and will be used to support research and restoration efforts. (Photo Credit: Joshua Prezant)