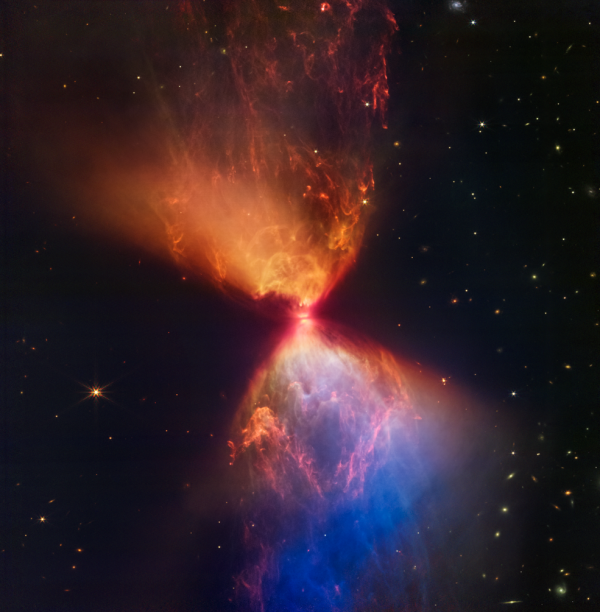 NASA’s James Webb Space Telescope has revealed the once-hidden features of the protostar within the dark cloud L1527, providing insight into the beginnings of a new star.

NASA’s James Webb Space Telescope has revealed the once-hidden features of the protostar within the dark cloud L1527, providing insight into the beginnings of a new star. These blazing clouds within the Taurus star-forming region are only visible in infrared light, making it an ideal target for Webb’s Near-Infrared Camera (NIRCam).

The protostar itself is hidden from view within the “neck” of this hourglass shape. An edge-on protoplanetary disk is seen as a dark line across the middle of the neck. Light from the protostar leaks above and below this disk, illuminating cavities within the surrounding gas and dust.

The region’s most prevalent features, the clouds colored blue and orange in this representative-color infrared image, outline cavities created as material shoots away from the protostar and collides with surrounding matter. The colors themselves are due to layers of dust between Webb and the clouds. The blue areas are where the dust is thinnest. The thicker the layer of dust, the less blue light is able to escape, creating pockets of orange.

The protostar within the dark cloud L1527, shown in this image from NASA’s James Webb Space Telescope Near-Infrared Camera (NIRCam), is embedded within a cloud of material feeding its growth. Ejections from the star have cleared out cavities above and below it, whose boundaries glow orange and blue in this infrared view. The upper central region displays bubble-like shapes due to stellar “burps,” or sporadic ejections. (Photo Credits: NASA, ESA, CSA, and STScI. Image processing: J. DePasquale, A. Pagan, and A. Koekemoer (STScI))